What is a pergola? Pergolas have long been a favorite garden or backyard feature in Europe. In Italy, Greece, and other Mediterranean regions, these structures have served as a rest area in vineyards, spas, and herb gardens. They were once very popular as a shady overhead for small open-air markets.

Despite their decline in popularity during the 19th century in which naturalistic garden designs became the favored look, pergolas have once again become a popular garden and backyard accent, particularly in yards where recreational activities take place. Homeowners often add a gazebo to the backyard as a place for picnicking or for relaxation after swimming in the pool.

A pergola from Amish Country Gazebos adds a beautiful touch to any backyard because it can be constructed of kiln-dried softwoods and built in the popular Amish style.

What Is A Pergola?

Creating an enjoyable backyard entertainment and relaxation area is an exciting challenge. A backyard pool surrounded by stunning landscape designs, a gazebo, and a pergola becomes the talk of the neighborhood. Pergolas are often overlooked by homeowners who desire a truly unique styling project for their backyard, but these simple structures are not only affordable, they also create a shady rest area that complements the sunlit portions of the yard.

What is a pergola canopy?

Pergolas are shaded structures consisting of posts or pillars supporting an open-latticed roof. They are often constructed over a walkway or sitting area, with vines or woody shrubbery forming a green shade in the lattice. Pergolas are often built near a pool area because their open-air shadiness creates a comfortable, cool rest area.

These structures can be purchased as a pre-fabricated kit. Because of their lightweight construction, they do not require a sunken concrete foundation. Sturdy support pillars are fastened to the overhead lattice, and the entire structure can be set directly on a concrete or tile floor. Walkways can be lined with stones upon which the pillars rest.

Wood pergolas have a top made from slats. These are shaped in cross-fashion and can support vines or other shrubberies. They are available in rectangular, square, or triangular shapes when ordered as a DIY kit.

Vinyl pergolas are available in a wide variety of color shades. These structures require very little maintenance and will not discolor for many years. Vinyl pergola kits come with all hardware included, making for easy construction. 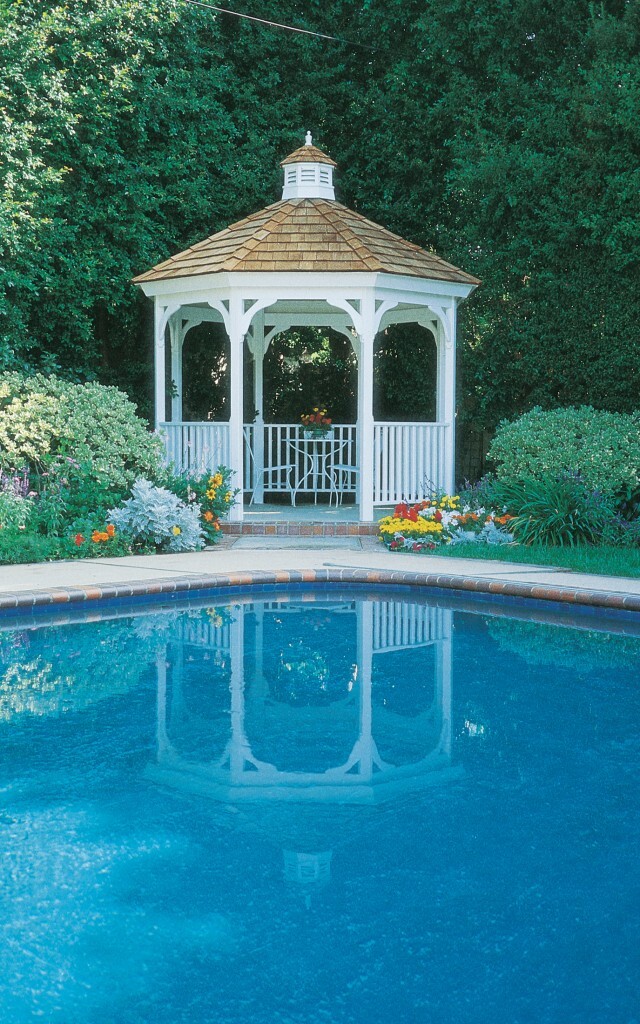 Customers can choose from a variety of sizes, lattice designs, and pillar styles. The kits are shipped to any address in the nation and are ready for immediate installation. The Amish wood-style pergolas are particularly popular because of their classic appearance. These pergolas cost very little, yet they do much to increase the overall value of the property.