What is a Gazebo? 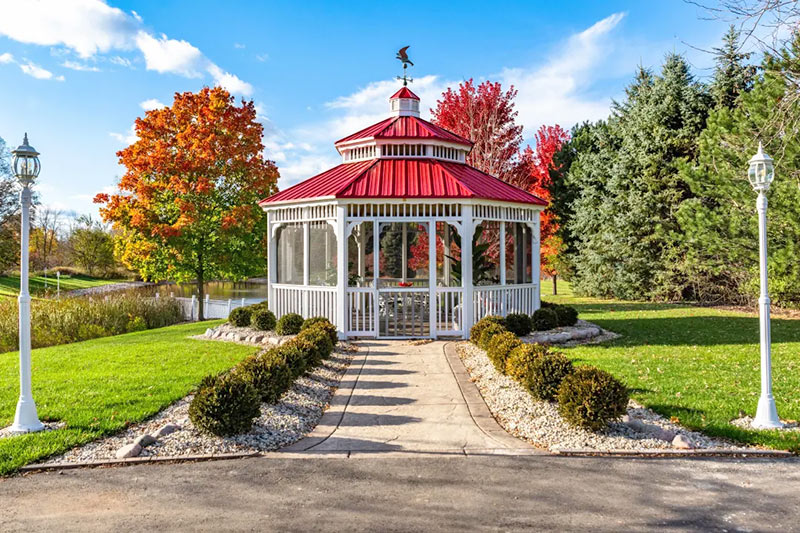 When it comes to landscaping, there is nothing quite like a gazebo to make a beautiful place even more appealing.

What Is A Gazebo?

Gazebos are freestanding structures with a roof and cupola and open walls on the sides. Cupolas on gazebos are generally for aesthetic purposes. Some homeowners choose to include a weathervane on top of the cupola for extra beauty.

The History of Gazebos

They have been known by many names including summerhouses, kiosks, pavilions, pergolas, arbors, pagodas, and more. Gazebos have graced our world for millennia.

The earliest gazebos resembled towers on the roofs of houses. They typically were used to provide basic shelter, enhance land, and also provide shade.

Approximately 5,000 years ago the Egyptians built some of the first ground-based gazebos. They were constructed near a water supply so produce could grow via vines, trees, and flowers.

Gazebos were made an integral part of outdoor landscaping by the Persians, who incorporated them into their magnificent flower gardens. Persian gazebos were havens of relaxation but also doubled as a workspace where treaties were signed and dignitaries were welcomed.

Greeks built their gazebos for public use, often out of marble and near a temple. For Roman families, gardens and gazebos were staples of everyday life. Especially among the rich who dwelt along the Mediterranean.

While gazebos found popularity in Europe during the Middle Ages, particularly at many monasteries, they did not garner much attention in the United States until the mid-1900s.

Gazebos of a variety of shapes and sizes have been gracing the landscapes of commercial and private properties across America ever since. They are common features of gardens and parks, and often host picnics, shelter hot tubs, and provide a central gathering place for family and community activities.

Gazebos are a place of shelter, a catalyst of fun and fellowship, and an upgrade to even the finest of gardens.

There are several types of gazebos that are crafted with wood, however the type of wood matters. Amish Country Gazebos uses Southern Yellow Pine. It is strong, majestic, and durable.

Unlike many other designations for wood, the term "Southern Yellow Pine" does not refer to a single species of tree, but to a group of species. Southern Yellow Pines grow across a vast portion of the United States from Texas to Virginia.

Amish Country Gazebos uses only hand-selected, #1 grade, pressure-treated, twice kiln-dried, Southern Yellow Pine throughout our custom gazebos. Other companies will use #2 and #3-grade lumber where they think they can get away with it.

We only use the highest-quality materials. A gazebo from Amish Country Gazebos has 20 to 30 percent more lumber than other companies' gazebos. That is one of the many reasons our company is the number one manufacturer of custom-built wood gazebos.

Vinyl is an alternative to wood gazebos. They have become popular because they are generally less maintenance compared to wood gazebos. With vinyl gazebos, you do not have to worry about termites or rot.

Vinyl Gazebos from Amish Country Gazebos are made with the highest quality resin, ensuring the structure will not fade, yellow, or crack. They are available in white or almond. 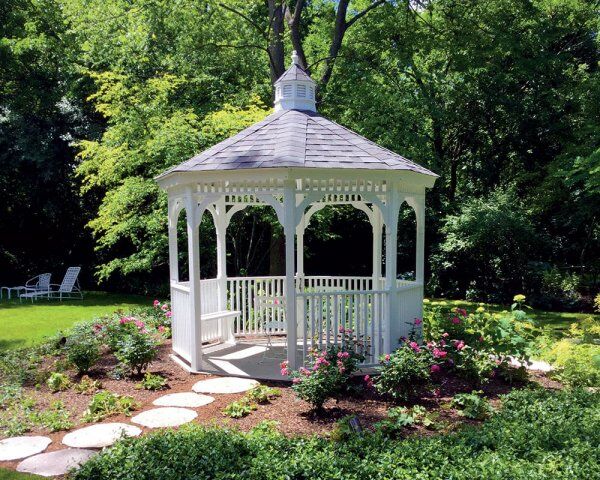 One of the most exciting aspects of purchasing a gazebo is customizing it to how you would like it to look.

Shingle colors can match or complement the roof of your home.

There are many options when it comes to how you want your gazebo stain to look. If you choose a natural wood look, we offer 5 different stain color choices including Cedar, Canyon Brown, Cinder, Mahogany, and Clear Wood Finish. Additionally, we also offer the option to paint your gazebo white or match a paint color of your choice.

There are many options when it comes to how you want your gazebo to look. If you choose a natural wood look, we offer 5 different stain color choices including Cedar, Canyon Brown, Cinder, Mahogany, and Clear Wood Finish. Additionally, we also offer the option to paint your gazebo white or match a paint color of your choice.

Ceiling Fans are a great accessory for your gazebo. The lights on the fan give you the ability to enjoy your gazebo in the evenings. The fan adds a breeze, which is perfect for enjoying your gazebo during the hot summer months.

The perfect decoration for the top of your gazebo is a weathervane. We offer over 50 styles to choose from.

Benches can be added to your gazebo to provide a comfortable place to sit inside. This is perfect for entertaining, family gatherings, and more! You can add 1 to 7 benches to your gazebo.

Amish Country Gazebos offers Gazebo-in-a-Box, which is a more affordable, DIY option for those who wish to own a gazebo.

The gazebo-in-a-box is made in bulk during the winter months when we are not as busy. Additionally, we mass-produce the interchangeable parts so economies of scale work for you. A gazebo-in-a-box features a lot fewer options for customization compared to a custom gazebo.

We offer vinyl and wood gazebo-in-a-box, and you can choose from an 8x8 gazebo kit, a 10x10 gazebo kit, or a 12x12 gazebo kit. Easy-to-follow instructions are included, so all you will need is a few tools and a friend to help with assembly!

What Can A Gazebo Be Used For?

Considering adding a gazebo to your property? There are many items to take into consideration, including how to landscape with your gazebo?

First, decide whether you want your gazebo to blend in with its surroundings, or if you would prefer it to stand out. If you are looking to put a gazebo along your tree line, a wooden gazebo would be the best choice. If your gazebo will be the centerpiece of your outdoor atrium, a vinyl gazebo may be a great choice.

Next, decide what your gazebo will be used for. Many individuals choose to enclose a hot tub, a hammock, or patio furniture.

Answering these questions will help you determine the right gazebo choice for you. We recommend visiting some gazebos (if possible) to ensure you are satisfied with the type of gazebo you choose.

Determining the size of your gazebo will also depend on how you would like to use it. Smaller gazebos are great for enhancing landscapes and gardens. Large gazebos are the best option for entertaining and gathering with family and friends.

One of the most popular uses for a gazebo is enclosing a hot tub. This gives you the ability to enjoy your gazebo all year long no matter the weather. Amish Country Gazebos offers high-quality, durable structures to cover your spa area.

Many hot tub owners choose rectangular or oval gazebos because they provide enough space for not only the hot tub but extra room surrounding the hot tub as well. The extra room can accommodate benches or other furniture to have a seating area.

Planning Where to Place Your Gazebo

Choosing where to place your gazebo is an important decision. You will decide which direction your gazebo will face.

Another consideration in gazebo placement is the ambiance. If you are looking for peace and quiet, then it may not be best to place it close to neighbors' houses or streets.

Amish Country Gazebos offers the ability to customize your own gazebo to help truly make your structure your own. We offer hundreds of options for customization that allow you to make your gazebo truly your own. Use our Design Your Own Gazebo tool to create your perfect outdoor structure!