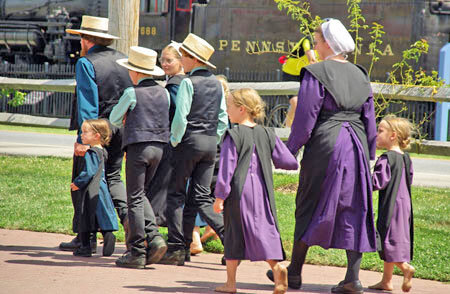 For those who did not grow up in or around plain communities, the different sects of Amish and Mennonite groups can be extremely confusing. At Amish Country Gazebos, we are often asked the question, “What’s the difference between the Amish and the Mennonites?”

The Amish and Mennonites both originated from the Anabaptist movement (those who rejected infant baptism) in Europe. In 1693, a Swiss Anabaptist leader named Jacob Ammann expressed his concern that the church was conforming too much to the world, and was failing to practice what he believed was the proper form of Biblical church discipline, shunning. Those who followed Ammann formed what would become the Amish church.

In the centuries that followed, Amish communities became known for their plain dress, mustache-less beards, head coverings, buggies, and simple lifestyle. Many Mennonite communities however, engage in some of these same practices. So how can you tell the difference?

Is a plain family Amish or Mennonite? Mennonite men may or may not have a beard, straw hat, or suspenders. In fact, many Mennonite men look no different from any other “English” man walking down the street. That said, they could also look almost exactly like the Amish fellas you’ve seen in pictures and on Lancaster County postcards! This is because there are a vast array of Mennonite sects, with different communities having different rules regarding their appearance and interaction with the world.

One fail-safe indicator in determining whether a family is Amish or Mennonite is to look at their method of transportation. Unlike the Amish, Mennonites are not prohibited from using motorized vehicles. In addition, Mennonites are also allowed to use electricity and telephones in their homes.

When it comes to their beliefs, the Amish and Mennonite faiths are very similar. The differences lie mainly in the outward practice of those beliefs. But foundational to both groups is their core commitment to faith, family, and community. In plain communities, man may look at the outward appearance, but for them, it is truly all about the heart.