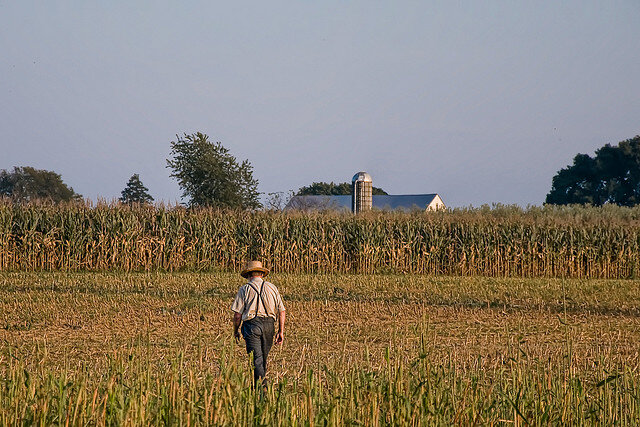 When it comes to the lifestyle of the Amish, folklore, fantasy and fascination abound. Here are 10 common myths about the Amish, and the facts on each:

1. All Amish are Farmers

While many Amish continue the generational tradition of farming, numerous members have chosen to enter other sectors. Many Amish are exceptional carpenters and woodworkers, doing construction and building furniture. Others are businessmen and shop owners.

2. The Amish don't use any electricity or electronics

The Amish do not have electricity running into their houses like the average American does, true. However, most families and businesses have generators, which they use to power various appliances or devices in their homes. Also, though they will not allow a phone in their homes, it is not uncommon for Amish to own cell phones for business purposes, or to have a landline phone in the barn or other outbuilding.

The Amish are actually a trilingual people. They speak Pennsylvania Dutch (or more properly, Pennsylvania German) in their homes, High German in church, and English when dealing with the non-Amish. Pennsylvania Dutch is not a written language, so children learn to read and write English in their earliest school years.

4. All American women who wear both dresses and head coverings are Amish

Girls often begin wearing head coverings to church functions at an early age, with some groups having their daughters' heads covered from their first week of attendance. Age can vary, but generally, between the ages of thirteen and fifteen, Amish girls start wearing a head covering on a daily basis. However, Amish are not the only women in America who wear dresses and head coverings. This is also common attire among Mennonites, Hutterites, Muslims, Orthodox Jews, and is even gaining popularity in some conservative Protestant circles.

If self-employed, the Amish do not contribute to Social Security. Otherwise, they do pay state and federal income taxes, property taxes, etc. The Amish do not, however, use public schools (often funded by property taxes) or utilize government services such as unemployment or welfare.

6. The Amish do not travel outside their communities

Because they generally travel by horse and buggy, outsiders tend to think they do not travel outside of their communities. It is important to understand that while the Amish do not own or drive cars, they often hire drivers who take their children to school, drive them to stores, transport them to job sites, and even chauffeur them on vacations! Amish love a good vacation as much as the rest of us and can be spotted traveling anywhere from the beaches of the East Coast to the deserts of the Grand Canyon. Some will even hop aboard a plane and travel overseas on mission trips!

The Amish don’t participate in traditional health insurance plans. They do however, go to doctors and embrace modern medicine. When significant medical emergencies occur, the communitites comes together to meet the financial need.

“Reality” shows such as Amish Mafia and Breaking Amish are perpetrated as truth to millions of viewers around the globe. But for those who live and work near their communities, they are seen as exploitation rather than fact. Amish Mafia, like Breaking Amish and other Amish “reality” shows, took a few elements of real-life truth and built an entire TV series around those elements. Though technically, one couldn’t really dub Amish Mafia with the disclaimer of “Based on a true story” considering the vast amount of misrepresentations in the Lebanon Levi drama portrayed on the show.

Though their traditions vary somewhat from Christians outside of the Amish world, they still celebrate Christmas – they even celebrate Second Christmas! Amish also celebrate Thanksgiving, Easter, New Years, and many other holidays.

Much to the contrary, an Amish couple often surprises their family when their engagement is announced during a Sunday morning service!